Join me to Dig deeper into our soils 🌱

‘Regen Ray’ is a soil lover and partnered with Farming Secrets to take their business into the next generation of online learning, launching the Soil Learning Centre during the pandemic. He now works with soil mentors from around the world to create educational programs all about soil.

He has been teaching people about soils for years through his online classrooms, webinars and his podcast, Secrets of the Soil. On his podcast, he interviews experts in their field and talks about important topics all about the soil.

He wears many hats from business to marketing to operations and even crypto. His belief that everything good in life starts with healthy soil has allowed him to dig deeper and help create inspiring conversations all over the world.

With a strong background in marketing, podcasting, mentorship, management, farming and a plethora of other endeavours, Ray Milidoni can be described as a wealth of regenerative expertise collated within just one mind.

What does regeneration mean to you? For Ray, it’s a persistent pursuit of knowledge, improvement, and possibility. It’s taking new, creative approaches to problems that have been previously “unsolvable” and solving them. It’s providing a wealth of knowledge to people who need it most, for them to take the next step in building their business. It’s coaching individuals who feel as though they’re stuck in a rut, confined to their current status, rather than their possibility for greatness.

You’ve heard the saying “Jack of all trades, master of none”. Well, Ray has found that diversifying his experiences, becoming a “Ray of all trades”, has actually been crucial to becoming a master of some. Excelling in the fields of marketing, management, operations, public speaking, podcasting, event management and many more, Ray is not one to let an old saying determine his ability to perform and to triumph.

Nothing rings truer than this statement to Ray. As someone who has helped many businesses and individuals reclaim their purpose and get back in the game, none of his approaches would be as effective if Ray wasn’t entirely as invested in their pursuits as the business owners or individuals themselves. His caring, protective nature drives him to help wherever he possibly can.

A sharp mind is one of the most useful tools Ray possesses. The Razor Sharp Show podcast that he hosts is a true testament to his keen, logical, emotional and interpersonal intelligence. His discussions with people from a range of different industries and backgrounds are thought-provoking, energized and 1000% motivating.

Not just one for business, Ray has unearthed a passion deep within for the natural environment, specifically regenerative farming and soil health. His belief that everything good in life quite literally starts with soil has helped him to nurture quite a name for himself within the farming industry. Having grown up in a traditional Italian family, he knows all too well the values of the retrosuburban movement (even if it did take him a number of years to move past the fact that it meant he had waaaay more chores than his friends, as a kid, Sauce making day, wine making day & salami day). You can catch him in action, cultivating his newfound business partnership with Farming Secrets via their website and social platforms.

He makes a conscious effort to be better and to do better, not just for himself but for the environment and his fellow runners in the human race. This awareness, when brought into contact with people who are open to it, spreads like wildfire and has been a catalyst for change within the organisations he has been and is currently a part of.

Ray’s ENFJ personality type sets him apart from others with his personable, responsive, and curious nature. People gravitate towards him as he proves himself to be trustworthy, loyal, and insightful to the highest degree. His empathetic nature allows him to relate to people, understand their problems fully, then come back to them with resourcefulness and expressive creativity to provide a regenerative, lasting solution.

With Kolbe-A 3-2-8-7  strengths relating to Simplify – Innovate – Adapt – Protect, Ray is well adept at seeing the bigger picture, thriving on interruptions, defying the odds, and building sturdy foundations to support any project or culmination of ideas. This combination of strengths makes him a force to be reckoned with when it comes to organisation, creative problem solving and simply making a difference for the better.

Working with Ray is an experience that many have described as genuine, passionate, extraordinary, and inspiring. Reach out to him today if you’re ready to place your problems into his highly capable hands and come away with the means to fully regenerate your business or your lifestyle.

Ray loves solving problems. Have you got something on your mind, from business to marketing to crypto, blockchain and of course SOIL!

Request a booking below, He’d love to help!

Let's have a chat

To live in a world where everyone continues to stay sharp and have access to on-demand learning and education. “Just in time learning” means you can learn, unlearn and relearn all on demand. Education is a skill and a process of gathering information and being resourceful with what you have. The real magic is that once you are educated you can gift it back and teach others.

If I see someone in trouble, I help out in any way that I can.
I am constantly on the lookout for new ways to improve my life.
I feel driven to make a difference in my community and also the world.
I enjoy facing and overcoming obstacles to my ideas.
Nothing is more exciting than seeing my ideas turn into reality.
If I see something that I do not like, I fix it.
No matter what the odds, if I believe in something, I will make it happen.
I love being a champion for my ideas, even against others’ opposition.
I excel at identifying opportunities.
I am always looking for better ways to do things.
I love to challenge the status quo.
When I have a problem, I tackle it head-on.
I am great at turning problems into opportunities.
I can spot a good opportunity long before others can.

At the end of the day it’s not what I say I can do, it is what others are saying about me!

Ray has been a true inspiration to me as not only a colleague but also a leader. He utilizes his wealth of experience to problem solve but also leads by example, demonstrating a hunger to evolve and develop new skills. As General Manger, often tasked with many objectives, he tackles these with the utmost efficiency whilst also providing the highest level of support to his staff. In short, Ray is a real pleasure to work with.

Ray is a inspiring leader. As GM he is instrumental in the day to day running of WME. Across multiple departments Ray is able to meticulously identify areas where the business can achieve great efficiencies, in turn contributing to a happier and more effective workplace.

Further to this analytical approach to growing WME, Ray always makes himself available should anyone need advice, inspiration or guidance on issues both work related and not.
It is this personable approach to Management that has seen Ray become an extremely effective and supportive leader at WME.

Ray has been an amazing mentor with a strong fundamental belief in helping others, which has enabled him to meet goals with the help of strong, fast paced teams. It is this passion for helping others that is of remarkable rarity in organisations today. Moreover his educational spirit can always be felt, elevating everyone around him at all times. I highly recommend Ray for any leadership role.

Love this fresh podcast. Ray is entertaining and always has a great take on everything. Guests are top of their game and full of good advice. Thanks Ray!

Ray is the epitome of an entrepreneur. A solution based thinker who possess the perfect combination of skill sets to be our General Manager. He is constantly thinking outside of the box and taking a holistic approach to manage the company with efficiency and effectiveness. Equipped with a wealth of knowledge, Ray has a thorough understanding of the digital world making him an absolute pleasure to work with and with for, at WME.

Ray has an outstanding ability to lead by example. An extremely hard worker, in such a fast paced work environment, he was able to take the largest digital agency in the country and mend its flaws. A great asset to any organisation!

As GM and as a person, Ray goes out of his way to help everyone. He’s an inspiring leader and mentor, and is never too busy to offer advice and guidance. He is continually pushing me to be better and I find his leadership takes me beyond what I thought possible, both personally and professionally.

His friendly style is easy to be around, while he works hard to keep us sharp and on track. He combines light-heartedness with focus that drives us to work hard without feeling under pressure, getting the best out of everyone around him.

Ray Milidoni is an exceptional manager who has guided me through many turbulent moments in my career. He has been a mentor and a friend, providing support and encouragement while promoting autonomy. Ray has a vast knowledge bank of the digital landscape and is always working on expanding that knowledge further. I am confident he will achieve all he sets his mind to, and more.

Ray is a hard-working, entrepreneurial thinking, genuine good guy. He was an amazing mentor when we worked together and continues to be so. He always has a solution to every problem and his knowledge of all things digital and the tools available results in higher productivity for everyone he works with.

Ray Milidoni is the Top level business adviser & operator that I have ever met. Ray has a high standard of ethic’s, brings forward positive and genuine business practices and has organised “off his own back and to his credit” a method to bring these people into the spotlight via podcasting. Ray has all the following attributes to succeed at to “turn any business into a Multi million dollar company”. Ray has highly refined people skills, always makes you feel welcome and gives you feeling of trust. In watching from the outside in, Ray has a structured intelligence and personal experience he can bring to any business table. Ray has done the hard miles and has earned his place and has thrown everything at the industry he loves. I have attended functions and listening to other business owners thru podcasts about their personal experiences. I have learned so much and have found this as an amazing way to “Tap into high level of personal experiences in business, career and people”. With work I believe.. “Work is our love made visible!”. loyal follower, Toni

It is always delightful to work with someone with the energy, passion, extraordinary knowledge and customer service skills as Ray and his team.

After doing my 6 P’s of Podcasting Course the team at Happen Films made this amazing video! 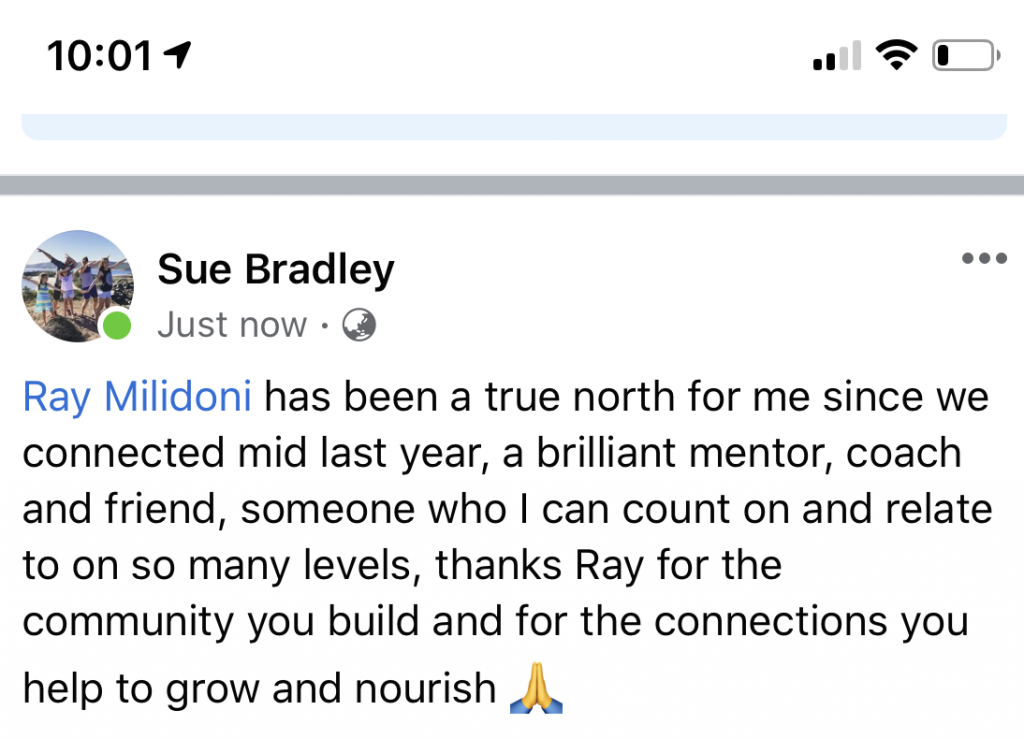 After doing some work with David Jenyns for his Authority Content book launch event, Ray received this video Review/Testimonials! Thanks DAVE! Please watch the video below

Ray is an absolute rockstar when it comes to connecting individuals. He blends his passion for digital marketing and event management to produce memorable events. Through attracting high calibre individuals to his events, I along many others have benefited through growing our network